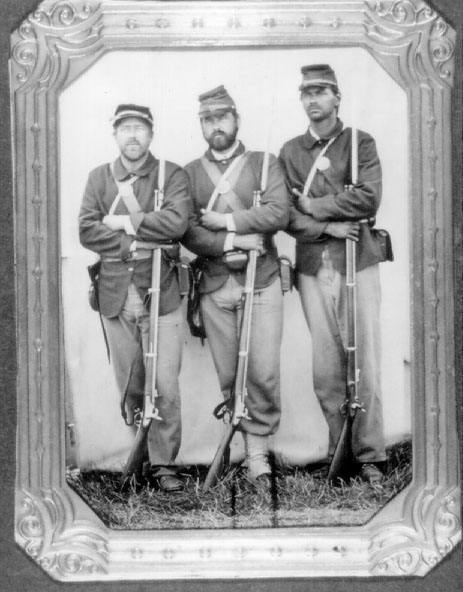 June 16, 1862:  Battle of Secessionville, So. Carolina – Gen. Henry Benham puts his two Federal divisions ( about 6,600 men) on the road early in the morning, with Stevens’ division drawn up on the right to attack Ft. Lamar near this town.  Gen. Wright’s Yankees are drawn up on Stevens’ left, to cover his advance.  Facing the Federals were about 2,000 Confederates under Gen. Nathan “Shanks” Evans.  The Federals step off at 4:00 AM, with the 8th Michigan in the lead.  The 8-inch Columbiad cannon at the fort opens with a round of grapeshot which sweeps a large gap in the center of the Michigan line, but they keep pressing on until they reach the parapet, firing down into the fort.  Stevens throws in more regiments, but Evans places fresh men in the fort’s defenses.  Finally, Stevens calls a withdrawal, with heavy casualties.  At this time, Wright’s division is moving up, accompanied by Gen. Benham.  Wright wheels right into position, but is attacked on his left flank by fresh Southern troops from the north, under Hagood---with the Eutaw Battalion and the 24th So. Carolina.  Wright details several regiments and some artillery to hold off Hagood, and tries to help Stevens, but neither general can see a way to advance across the open ground to the fort’s walls without severe losses.  By 9:00 AM, the Federals call off the assault.  Confederate Victory 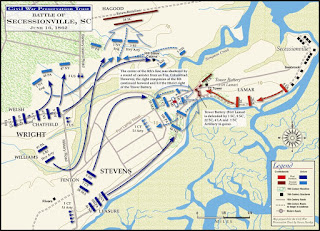 ---Gen. Robert E. Lee orders Stonewall Jackson to begin plans to leave the Valley and join him at Richmond.

---Sarah Morgan writes in her journal of the vindictive treatment of other Louisiana women against the Yankees.  Sarah is herself a patriot and true-blue secessionist---but is horrified at the unchristian changes in her neighbors:

This war has brought out wicked, malignant feelings that I did not believe could dwell in woman’s heart. I see some of the holiest eyes, so holy one would think the very spirit of charity lived in them, and all Christian meekness, go off in a mad tirade of abuse and say, with the holy eyes wondrously changed, “I hope God will send down plague, yellow fever, famine, on these vile Yankees, and that not one will escape death.” O, what unutterable horror that remark causes me as often as I hear it! I think of the many mothers, wives, and sisters who wait as anxiously, pray as fervently in their faraway homes for their dear ones, as we do here; I fancy them waiting day after day for the footsteps that will never come, growing more sad, lonely, and heart-broken as the days wear on; I think of how awful it would be if one would say, “Your brothers are dead”; how it would crush all life and happiness out of me; and I say, “God forgive these poor women! They know not what they say!” O women! into what loathsome violence you have abased your holy mission! God will punish us for our hard-heartedness.

---Lt. Charles Wright Wills, of the Union Army of the Mississippi, in the 8th Illinois Infantry, gives us a rather idyllic and pastoral view of life in camp after a rigorous campaign:

Rienzi, Tishomingo Co., Miss., June 16, 1862.
We are camped here enjoying ourselves grandly. As our brigade is scattered over a line of 50 miles we just pitch our headquarters in the quietest spot we can find independent of the command. There are only two companies now out of the 24 within 8 miles of us, and all we have to do with any of them is to send them orders and receive their communications and forward them. In the heat of the day we read and lounge in our tents, and mornings we go to the creek and bathe and then ride a dozen or so miles to keep our horses exercised. I have a clerk, too, for my copying, etc., so I’m a gentleman. Evenings I visit generally some of the half dozen families within a half mile of us of whom I borrow books and in return furnish them with occasional papers. We have splendid water and my health is perfect. This is the healthiest part of the South.

Posted by Wolfshield at 9:20 PM